What I'm Reading Now-The Pillars of the Earth

Pillars of the Earth

by Ken Follett-All I really knew was that this was about a guy building a cathedral, but the cathedral is just the backdrop to so much more! I really enjoyed this look at life in medieval England and all the Spy-vs-Spy shenanigans carried out between the nobility and the church and even between the church and the church. I'm not usually much of a history buff-names and titles and locations and battles and politics and whatnot-and there was plenty of that in this story, but I just kept some notes on who everyone was and the basic quarrels that they had with each other, and that helped keep things straight throughout the book. It was never overwhelming or belaboured, and I thoroughly enjoyed the whole thing.

The story spans 51 years in 12th-century England and provides plenty of good guys and bad guys, and, boy, are some of the bad guys bad. There's the aptly-named Bishop Waleran Bigod who is not so much actively evil as he is greedy and power-hungry and willing to wield his power as a man of God to his advantage above all else.  William Hamleigh, on the other hand, is truly a horrific character.  William, who likes to play games of "stone the cat," William who can't get it up unless he can see fear and pain in the eyes of the woman before him, William who uses murder and rape to keep his starving tenants in line, William who, well, you get the picture.

Working on the side of good is Philip, a pious monk who genuinely believes in doing God's work by helping God's people, not by acquiring power and wealth like some people we could mention (I'm lookin' at you, Bishop Waleran).  Philip is smart, kind, and resourceful, and he finds himself in charge of a priory whose church has just burned down.  Luckily, Tom Builder, who has been roaming the country-side looking for work, preferably as master builder on a cathedral, has just arrived on scene.  As Philip considers the possibility of erecting a stone cathedral to the glory of God, he presses Tom about why it is so important to him to be appointed master builder on a project such as this:


Tom had not expected that question.  There were so many reasons.  Because I've seen it done badly, and I know I could do it well, he thought.  Because there is nothing more satisfying, to a master craftsman, than to exercise his skill, except perhaps to make love to a beautiful woman.  Because something like this gives meaning to a man's life.  Which answer did Philip want?  The prior would probably like him to say something pious.  Recklessly, he decided to tell the real truth.  "Because it will be beautiful," he said.

Being that this is a story of church and wars and building in 12th-century England, the majority of the characters are male, but there are two main female characters who are both strong, intelligent, independent women and are very much heroines of this story in their own rights.

I enjoyed this book far more than I thought I would, and I would encourage anyone who is intimidated by its 973 pages to give it a shot.  I think you'll be able to tell within the first couple of chapters whether it's something you'll like or not.

Oops!  I got carried away and published before I put in my usual call for others' reviews.  I didn't run across any reviews in my blog roll, but maybe I missed yours.  If you've reviewed this, let me know, and I'll include a link to your review.  If you've read it but not reviewed it, I'd love to hear what you thought about it, so leave me a comment and let me know!
Posted by Dreamybee at 2:37 PM 9 comments:

Email ThisBlogThis!Share to TwitterShare to FacebookShare to Pinterest
Labels: architecture, books that lived up to the hype, books-2010, England

Happy Garden Bloggers' Bloom Day!  Visit our host, Carol, at May Dreams Gardens to see more gardens in bloom or to participate.

Wouldn't you know it? About two days after the last GBBD, my Tilandsia cyanea (Pink Quill) started spitting out bright purple flowers.  I thought about taking pictures then, just in case, but I figured I had enough that they would last me until today.  And they did...sort of.  There are still a few left that haven't bloomed yet, so it isn't out of blooms, they just aren't blooming today.  *sigh*  Oh, well, maybe in a couple more years, I will have some Tilandsia blooms to show you. Until then, you can visit this link, and just pretend that the flowers you see there are on my back porch.

Here's what I do have:

The usual suspects, a.k.a Pam, Jay, and Nameless Bob 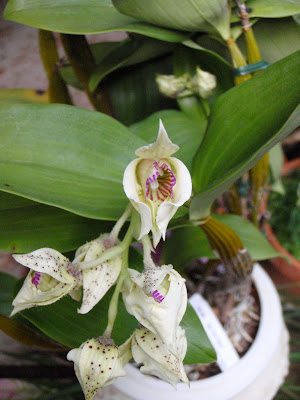 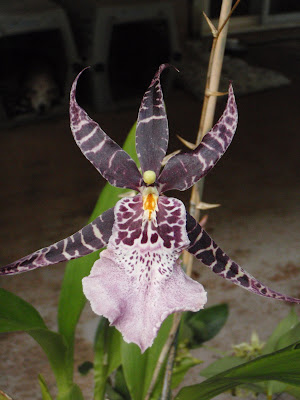 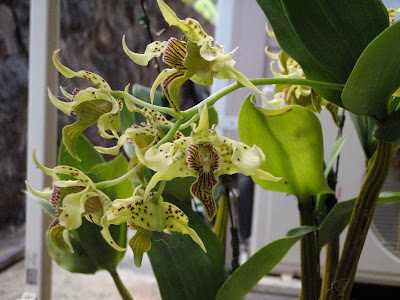 Seriously, "Nameless Bob" is all I have for this one.


My Euphorbia Leucocephala still have a few hangers-on, 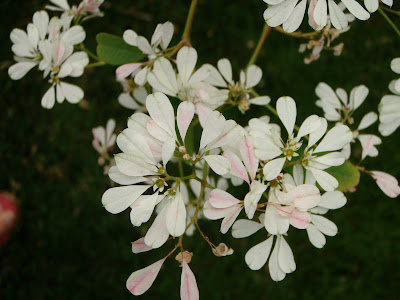 but mostly, it's getting a little leggy and sad. The white is fading, and the new growth hasn't really begun yet. February for my Euphorbia is like the in-between stage of trying to grow your bangs out for you and me. 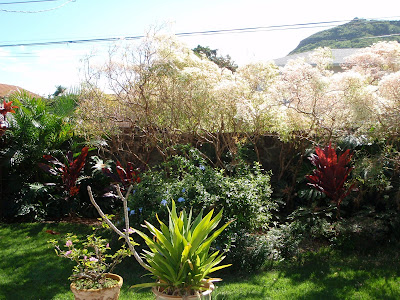 It's cousin, the rescue pointsettia, seems to be in its prime. I say rescue pointsettia because this was one of those Christmas dinner center pieces from two Christmases ago that was headed for the compost bin if I hadn't brought it home with me. Most of the year, it just sits quietly in its pot, growing out its bangs, but for a month or two every year, it does fancy itself up a little bit. 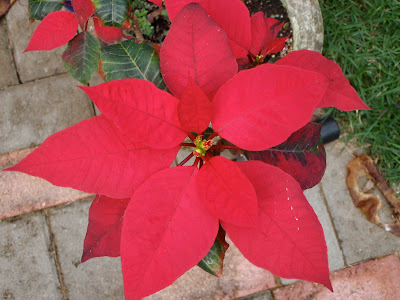 My Red ginger (Alpinia purpurata) is in pretty constant bloom, 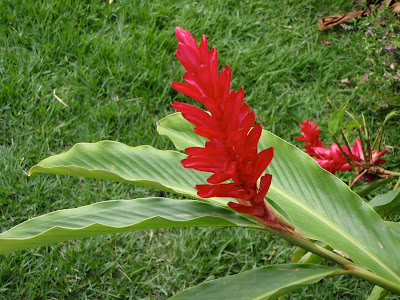 but now it's starting to do something strange. All of a sudden, there seems to be a bunch of new growth coming up from the flowery part of the plant. What is this? Is this normal? 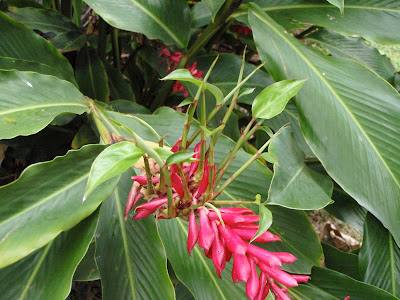 My orange shrimp plant (Pachystachys lutea) is still putting on a good show as well. 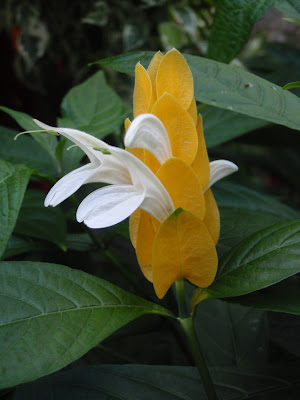 I tried to get a good shot of what's going on inside, but this is the best I could do. 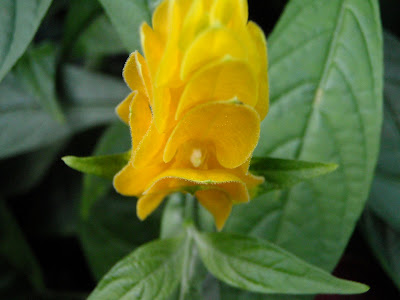 Right next to my shrimp plant is my spider lily. It's got some nice blooms today as well as some seed pods setting from the last group of blooms. 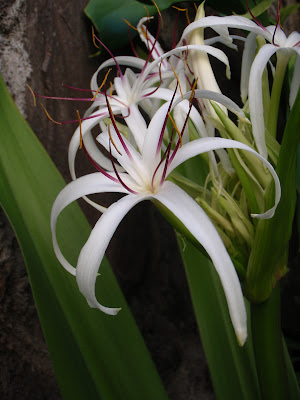 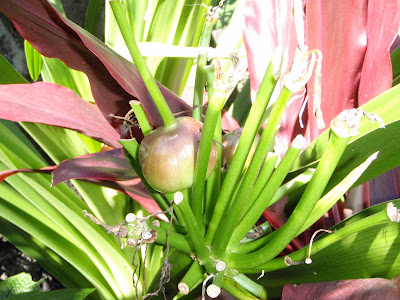 The snails like to hang out on this plant, and as far as I can see, they don't seem to be doing any damage. 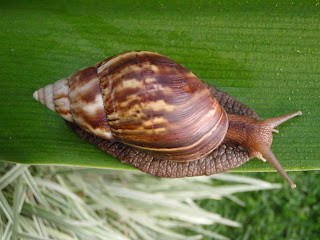 Here are three of them tucked down into the base of my lily. 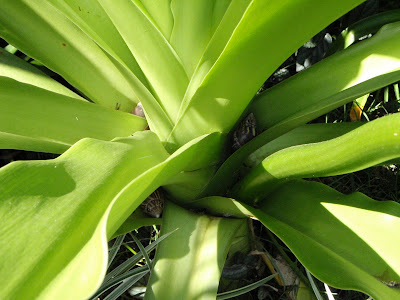 They're sort of like teenagers hanging out at the mall. I tend to eyeball them with suspicion, but I can't really pin anything on them. Every once in a while they wander over to my kale, where they DO do some damage, but I just pull them off and relocate them to some detritus-filled area closer to my lilies. Also, snails are tenacious. And stretchy! Maybe I'll get a picture of that one of these days.

My Clerodendrum is just revving up for what should be some nice February blooms. 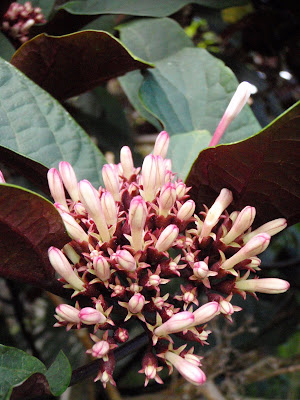 My bouganvillea was all a little faded last month, but it's rallying nicely this month. 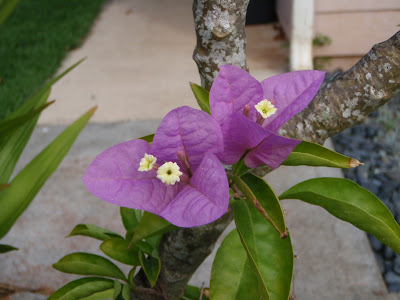 I'm not sure what these are, but they are little border plants whose blooms I discovered quite by accident. I cut some of the foliage to use in a bouquet, and when I got them up to eye level, I realized they have some sort of bloomy, flowery thing going on. 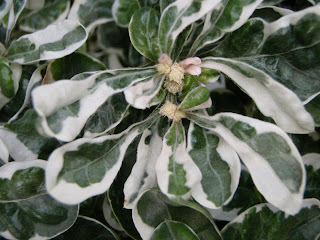 I recently planted some lobelia, and I couldn't be happier with the color. They're almost iridescent in person. 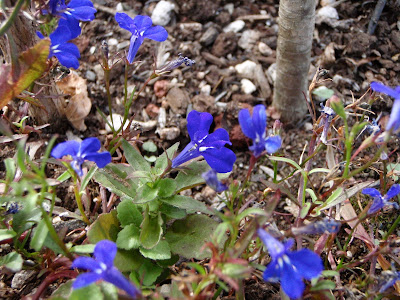 I'm looking forward to some tomatoes soon!  Two, to be exact.  Hey, I'm not feeding the world, but every now and then I can make my salad more exciting. 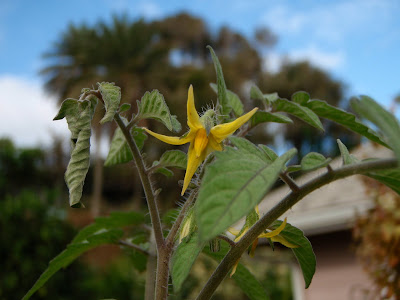 And, if the birds don't get these, I will have two strawberries to go with my two tomatoes. 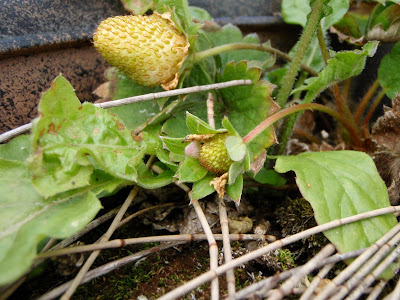 My garden buddy, Buster, got out of his crate and walked from the back yard to the front yard with me while I was collecting pictures, but he hasn't been feeling well lately, and that was about all he felt like doing. After that, it was time to lie down again. The doc's got him on some meds, and he is definitely feeling better than he was a few days ago; but I know we have to start steeling ourselves for the day when the meds don't make him feel better, and I'm afraid that's going to be sooner than later. So, if my GBBD posts fall off, you'll know why, but in the meantime, please send happy, healthy thoughts Buster's way.
Posted by Dreamybee at 2:51 PM 15 comments: