Pictures from My Summer Vacation

Well, technically, it's just going to be one picture today, but it pretty well sums up our summer vacation through the beautiful, sunny, west-coast states of California and Oregon last month. 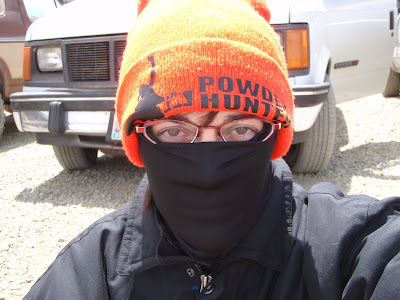 Email ThisBlogThis!Share to TwitterShare to FacebookShare to Pinterest
Labels: I hate being cold, Oregon, travel

What I'm Reading Now-I am the Messenger

Before I get started I just wanted to say thanks to all the people who stopped by and left comments while I was gone.  As promised, I was thirlled to see them all sitting there, waiting to be read, when I got back home.  I have lots of things to tell you about-paragliding, camping, redwoods, weird bugs, nice people, Yosemite-but it's taking me a while to get back into the blogging swing of things.  So, for now, business as usual with a book review.

I am the Messenger

by Markus Zusak-Based on my recent love of Zusak's The Book Thief, I decided to pick up this earlier work of his.  I can't say that I loved it, but I did find it entertaining.  Apparently The Children's Book Council of Australia felt a little bit more strongly about it than I did.  They recognized it as their 2003 Book of the Year for Older Readers (published as The Messenger).

After 19-year-old Ed Kennedy, underage cab driver, thwarts a bank robbery, he begins receiving mysterious messages in the mail.  His job is to decode the meanings and deliver the messages to the intended recipients.  The trick is figuring out who the recipients are and what messages they are supposed to receive.

Ed has some curteous thugs on his back to keep him moving forward with his mission, a dog whose stench keeps most people at bay, and, of course, an unrequited love for his co-worker and good friend, Audrey.

To give you a feel for Ed, here's what he has to say on his dog, The Doorman:


I suppose he'll die soon.  I'm expecting it, like you do for a dog that's seventeen. There's no way to know how I'll react.  He'll have faced his own placid death and slipped without a sound inside himself.  Mostly, I imagine I'll crouch there at the door, fall onto him, and cry hard into the stench of his fur.  I'll wait for him to wake up, but he won't. I'll bury him.  I'll carry him outside, feeling his warmth turn to cold as the horizon frays and falls down in my backyard.  For now, though, he's okay.  I can see him breathing.  He just smells like he's dead.

It comes gushing out, with words like spilled milk.  "And I wish it was me with you and not that other guy.  I wish it was my own skin touching with yours..."


And there you have it.


Stupidity in its purest form.


I watch them, and I watch the jeans on Audrey's legs.


We only sit there now.


Squeezed in, between us.


You can kill a man with those words.


Just words and a girl.

I liked Ed.  I can see how readers might think he's a little too dramatic, a little too earnest at times, but then isn't that kind of a part of being nineteen?

This was a vacation read for me, and I think it worked out well.  There was enough story that it was fun to curl up and read before falling asleep at night, but it didn't require my serious, undivided attention. Each message that Ed has to deliver more or less gets its own chapter or two; some overlap into others, but overall it's easy to find a good stopping point and easy to pick back up later.  Also, if you're like me and start to worry the minute you see a beloved pet introduced, especially one that's seventeen-years-old, don't worry.  The Doorman makes it through the book.
Posted by Dreamybee at 3:16 AM 5 comments: