Some of you know that Buster's been on a downhill slide lately, and we finally had to put him down on Tuesday night.  He's only been gone a day, but I miss him so much.  He's been a part of my life for 13 years, and I can't believe that he's not here anymore.  I know we did the right thing-it was time-but that doesn't make the house any less empty.  I've been trying to keep busy all day, but then the distraction ends, and the memories come, and I know I'll never look out to see him rummaging around in the flower beds or rearranging my rock garden-his aesthetic never did quite line up with mine-or curled up in a ball, sleeping soundly, happy to be anywhere his people were. 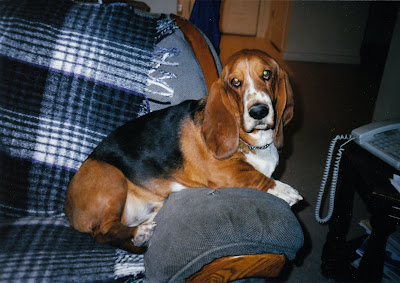 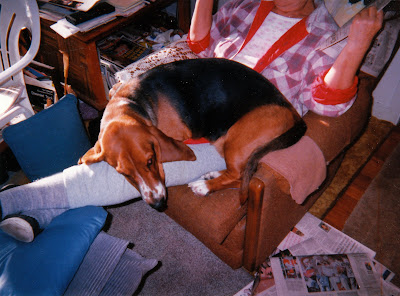 Colorado Springs-1997/98/99(?)-His other favorite spot:  a lap. Nobody ever said anything about a weight limit. 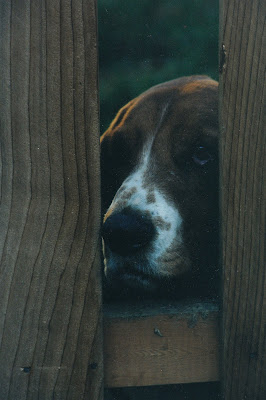 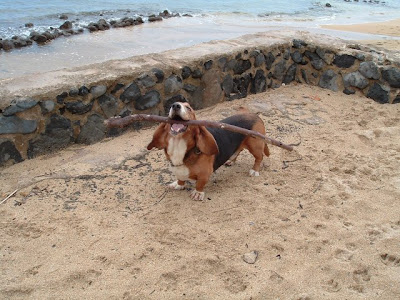 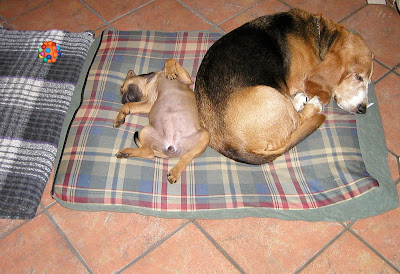 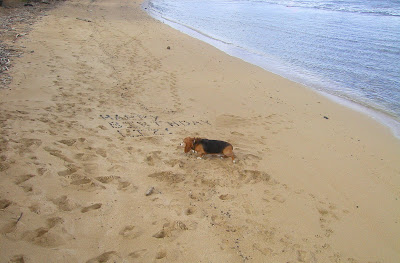 Hawaii-2005-Helping me with a birthday message on the beach. 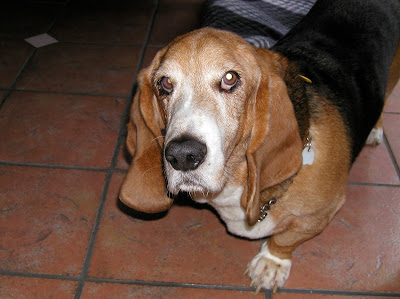 Hawaii-2006-You're starting to show your age, but you're still a handsome boy. 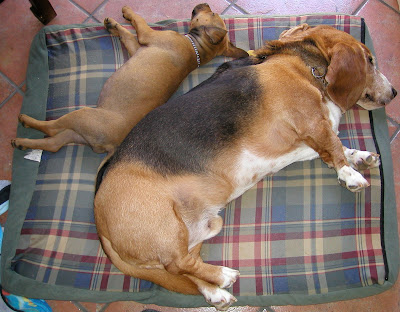 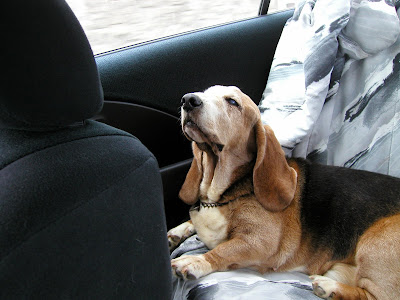 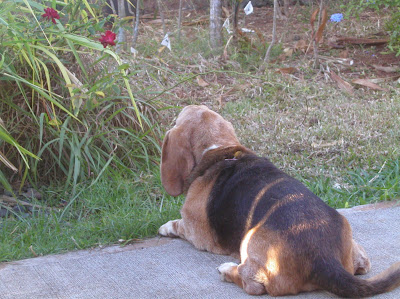 Hawaii-2008-Hanging out in the front yard. 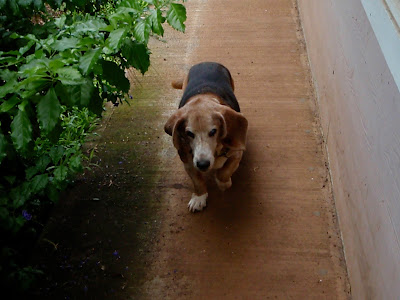 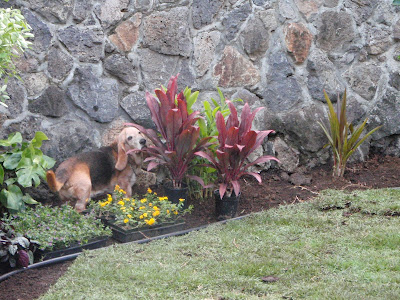 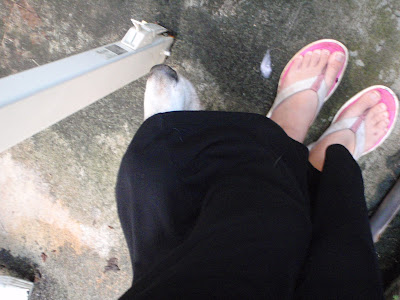 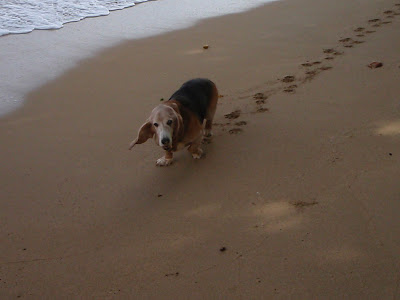 Hawaii-2009-Action shot at the beach. 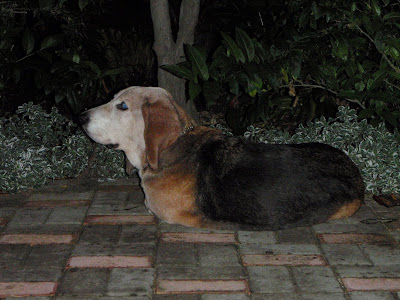 Hawaii-2010-Final days.  "Walking" around the neighborhood with his nose.
I love you so much, buddy.  Thank you for the love and the joy you brought into our lives.  I will always miss you and love you.
This has been a rough month in the blogosphere.  Florinda and Nymeth also lost pets recently-ladies, my heart goes out to you.  I'm so sorry for your losses-it doesn't seem to get any easier with time and practice, does it?  For those of you who still have them, hold your pets tight and let them know you love them.
Posted by Dreamybee at 1:42 AM

Email ThisBlogThis!Share to TwitterShare to FacebookShare to Pinterest
Labels: buster, Hawaiian fauna, I'm so sad it hurts, things that make me happy

Aw, I'm so sorry about your dog. I know how horrible it is to lose a pet. I had a cat for 15 years, and it was terrible for me when she died. Big hugs!

(Diane) Bibliophile By the Sea said...

So Sorry about the loss of your sweet family member.

I'm sad for you. You have wonderful memories of him.

The fact that your Buster is gone is sad enough, but seeing the wonderful pictures of him through the years is really heart wrenching. But what great memories.

--Anna
Diary of an Eccentric

Oh my goodness--that picture of him with the stick! What a special guy! I'm so sorry for your loss....

I'm so sorry you had to say goodbye to Buster. We lost our 13 year-old lab a few years ago, and I still tear up when I think about her. I did have to laugh looking at some of the photographs though. We added a puppy to our household last year, and just like Buster, our older dog kept looking at us like 'this thing isn't staying right? it goes home soon right? I didn't agree to this, I wasn't even consulted'.

You wrote a lovely tribute to your best friend. He was clearly lucky to have you as his friend.

The house does feel awfully empty with one of them gone :( I'm so sorry for your loss. I know this doesn't make things any easier right now, but it sounds like he lived a very happy life.

I am so sorry about Buster, and having just gone through this myself, I can imagine how you're feeling. I had Gypsy for about the same amount of time you had Buster, and it's a BIG adjustment to being without her. We're probably going to wait a while before we get another pet.

Thank you for sharing the wonderful pictures of Buster - looks like he was a real character! I know how much you miss him. Big hugs, and much sympathy.

What a sweet boy. I'm so sorry, I know how much that hurts. Pets are so special. I hope your heart heals soon.

oh, I'm so sorry to hear this. It looks like Buster had a fantastic life and was so loved!

Such wonderful pictures. We had a JRT for 20 years and amazingly it was still hard to let her go. It was the end of an era.

I'm so sad for your loss. My condolences.

He was such a handsome dog. Thank you for sharing your pictures and memories with us (they made me tear up because I know how hard it is to lose a dog). I'm very sorry that he is gone now.

Thank you all so much for your kind words and support. It really does mean a lot to me, and I appreciate that you all took the time to comment. I will get around to visit everyone, but it's going to take me a while.

I'm so sorry to hear about Buster. About 2 1/2 years ago we lost our first dog we got together as a couple. It was not fun at all. I was a little surprised at how hard it was.

Awww...I'm so sorry for your loss;-( He was such a sweet doggie, I can just tell from your photos and your description. It's sad that we have to let go of people and pets we've come to love...sometimes I don't 'get' that part of life (or at least, wish it wasn't the case). I hope you will be able to smile when you think of him and remember the good times, knowing he felt the same about you and had a wonderful life;-)

I know I'm late with this but I am so sorry for your loss. We almost lost our dog this past weekend (and we did lose one a few years ago) so I know how you feel. Sending hugs your way ... (((hug)))

Kyna-I'm sorry about your cat. It gets better, but it never really goes away entirely, does it?

Diane-Thank you. He was a sweet boy.

NellJean-Thank you. I do have wonderful memories of him. Despite his build (or maybe because of his build), some of my best memories are of his athletic feats!

Thomas at My Porch-They really are great memories-he was such a character!

Meryl-I love that picture! It's funny that he had that stick at all-he wasn't ever really a stick kind of guy. One of the funniest memories I have of our other basset, Sadie, was her dragging an entire branch around our yard in Albuquerque. Weird.

Curbstone Valley Farm-i'm sorry about your lab. I still tear up about our other basset that we lost 7 years ago, so I know what you mean. I hope your new puppy eventually managed to win over your other dog. :)

Nymeth-I think he did. I hope he did. And I hope you are feeling better too. *hugs back*

Florinda-I hope you are healing from your recent loss too. I understand not wanting to get another pet anytime soon. It's so hard to imagine life without them, but so hard to imagine putting yourself through this loss all over again. Hugs to you too.

Liza-Thank you. It's mending, but it's going to take a while.

Wendy-He was loved. Buster had fans the world over!

sweet bay-Wow, 20 years is a long time. It's not amazing at all that it was hard to let her go. Loving somebody for that long does not make losing them hurt any less. Having been through this and having lost our other basset unexpectedly at five years, I can say that letting them go isn't any easier, but I think it does make it easier to know that you've done the right thing by them. You still miss them just as much, but that's tempered with knowing that it was time for them to go.

Alyce-Thank you for stopping by to share them with me.

Mike-Buster was not our first "couples" dog-that was Sadie-but it's definitely different than losing them as a kid. I always had pets growing up, and they all had to be put down, but I was never the one who had to make that decision, the one to care for them from the time they were puppies, the one to notice when they were sick, the one to deal with their remains, the one left behind, wondering if all the decisions you made along the way were the right ones. I'm sorry for the loss that you and Jenn went through and that it caught you off guard. Pain sucks. Surprise pain sucks even more.

Jan(Thanks for Today)-I know what you mean about not "getting" that part of life. Right now, I could do without it, but I guess loving someone means missing them when they're gone. I do smile when I think of Buster, and eventually I'll be able to smile without all the tears.

Heather J-No worries-sounds like you've had plenty of your own stuff going on to deal with. Thanks for stopping by. I'm glad your doggie is OK. What happened?

My heart goes out to you and John... I'm so sorry for you and have very fond memories of Buster too. He was the only dog that Quila "understood" and I have always been thankful for that! I had to make the same decision for both Quila and Missy and it wasn't easy even if they were the right decisions. Hang in there....

JenM-Quila and Missy were such sweet girls-I know how much you miss them. I'm so glad that Buster and Tequila got each other. Bassets just don't play the same as other dogs. It was fun to watch them try to figure each other out!

These pictures are great! Looks like you have alot of great memories! Thanks for your comment as well, loss can bond people in a way like no other. I appreciate the kind words, and likewise, I'm sorry about your loss.

Ashley Amanda-Thanks for stopping by. I do have a lot of great memories, and I find that seeing all the pictures actually helps. When our last dog passed away, I almost took her picture off my desk at work because I thought it would just make me sad to see it. Instead it made me happy to come in and still be able to see her everyday. For me, that was a good lesson and came in helpful with Buster's passing.