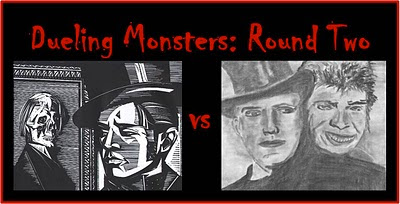 Happy Halloween, everybody!  I hope you are all having some spooky fun today!  I have been catching up on my spooky reading, thanks to Heather J. and Jill/softdrink.  Once again they have teamed up to host the Dueling Monsters read-a-long.  This year's monsters came to us in the stories of Dr. Jekyll and Mr. Hyde and The Picture of Dorian Gray

.
I had never read either book before so this was a good chance for me to catch up on some classic reading.  Dr. Jekyll and Mr. Hyde was delightfully short-I had no idea-a mere 84 pages!  It was an easy read, and I enjoyed it.  Dorian Gray was not quite as short-about 243 pages-but I think I would have enjoyed it more had it been only 84 pages since the last 84 pages (exactly 84 pages-I just checked!  Spooky coincidence??) is where all the good stuff takes place. (Seriously, I spent quite a lot of the first half of the book wishing that Dorian, Basil, and Lord Henry would just get in on already because, really, isn't that what they all wanted.)

.  As I said, I enjoyed this book.  I really didn't know what to expect other than the man and the monster.  It's been noted that there aren't any female characters of note in this story, but the first note that I wrote relates to the servant who witnesses Hyde's murder and then faints dead away.  What I wrote was, "Why with all the fainting?"  Victorian women seem to be famous for fainting (they even made couches specifically for this purpose).  Why?  Did they actually faint all the time?  I'm guessing they did, otherwise why make the couches?  OK, so then why were they always fainting?  Was it the restriction of the corsets not allowing them to get enough air to their brains?  Was it a combination of the heat and all that Victorian clothing?  Was it simply a convenient excuse to leave an uncomfortable situation?  Perhaps it was the cost of the couches themselves.  Eee!  That would make me swoon too!
Anyway...I think that Edward Hyde won this round of Dueling Monsters.  Although both books deal with the physical manifestation of evil, Hyde was a scarier creature because he eventually started to take over Jekyll against his will, the assumption being that someday the takeover would be complete.  The way Jekyll described the progression of the changes reminded me of a heroin addict.  Eventually the drugged state becomes normal and without it you become ill.  Eventually you need that which made you sick to make you feel better, but each time you need more and more of it.  Eventually it consumes you, and either you kill it or it will kill you.  Jekyll, himself, was a little wordy and boring for my taste, but overall, good job on a quick creepy story, Mr. Stevenson!

It could be argued that Dorian Gray (D.G.) is a scarier monster because his debauchery seems to be more willful.  He has the ability to decide at every turn whether to do good or not, and, apparently, generally chooses not to; but I have to wonder if he behaves any worse than a common criminal.  What makes him dangerous is simply that his evil doesn't show on his face.  Hyde's evil was out there for people to see-people were immediately repulsed by his appearance and thus knew to stay away.  On the other hand, people are taken in by Dorian Gray's beauty and his charm, "that indefinable attraction that Dorian seemed to be able to exercise whenever he wished, and indeed exercised often without being conscious of it."...much like a vampire...who never ages...and he does seem to suck people's souls dry.  Hmmmmm....interesting...anyway, the point is, people still choose to engage with him on some level.  If he's dealing with criminals, we assume they are complicit in their deals, if he is having some wild and crazy sex, we assume his partners are willing, although I suppose it's possible that that's not the case.  If he's doing drugs, well, somebody is likely selling them to him.  Certainly the murder he commits is a grizzly, terrible thing for which he shows little to no remorse, but that seems to me to make him a psychopath, not some otherworldly creature.  Not that psychopaths aren't scary, but in this day and age, they are no new news, I'm afraid.
Both books had some things in common that I found interesting.  For one thing, they both seem to be a bit (or perhaps quite a bit) autobiographical in nature (which, admittedly, makes the vampire psychopath thing a little more scary).  Both the Afterword of Dr. Jekyll and Mr. Hyde by Jerome Charyn and the Introduction of The Picture of Dorian Gray by Peter Ackroyd point to this.  For me, both books were frustratingly vague when it came to just what kinds of terrible acts Mr. Hyde and Mr. Gray were guilty of.  Aside from a couple of murders and some drug use, we don't know very much.  From what I could gather, their greatest sins seem to be that they were out having a lot of bawdy, raunchy, indecent sex.  This may have been shocking to their Victorian readers, but, again, it's just not very scary today.
botox can smooth out those lines around your mouth.  Been eating too much?  Liposuction can get rid of all that excess in no time.  Been having irresponsible sex?  Penicillin can clear that right up.  Been doing too much meth?  Well, honestly, there's not much to be done about that-let this be a lesson to you kids!  Don't do meth!  Been (sin of all sins!) aging??  Face lift, my friend.  And we do this all in the name of beauty, which was, of course, Dorian's great love.  *gasp*  Oh my!  Maybe this was a scarier book than I thought!
I still have to give the win to Mr. Hyde because his inherent evil repulsed people on sight, and I've been around those people, the ones who give you the willies even though there's nothing specific that you can point to as the reason why.  Also, a much less painful read.
So, now I'm genuinely curious.  If you could see the physical manifestations of all your evil deeds on your likeness without those signs ever showing up on your physical person, would you be more or less likely to behave badly?  Remember, there's no way to alter your likeness.  The effects are cumulative.  Once the evil is done, it's done, and it's recorded forever.  On your face!  Mwahahahaha!
Posted by Dreamybee at 2:03 PM

I'm glad you got this post in, even if it was at the last minute. And I'm glad you agree that J&H is the creepier of the two books!

Thanks for being a part of the Duel!

oh that's right! I think i remember you doing this last year. I thought the dueling monsters for Halloween was so clever. I have yet to time a good scary book for Halloween.

I recently visited your blog. It is a very interesting one. Keep it up.

*sigh* Another vote for the wrong monster! ;-)

I agree it would have been nice to see more of their dirty deeds (which makes me sound demented). But I still saw more evil in Dorian, mainly because he would have these little flickers of remorse, then he'd go out and do something bad...kind of a what the hell attitude. Whereas J&H just holed up and kept themselves apart from society. I saw more remorse in that book.

Heather-Last minute should be my middle name!

Wendy-Jekyll and Hyde is a good choice for last-minute Halloween reading. At 84 pages you could read it in bits in between trick or treaters.

softdrink-I rented the movie last night just to compare, and what the book doesn't show us, the movie quite makes up for. Oh my! Other than the names of the characters and the fact that they are in London, there's not much relation to the book though.

I do see your point about Dorian, but I went back and forth between feeling like he was a psychopath and feeling like he had been so brainwashed by all of Lord Henry's talk that he was able to live in a constant state of denial about the things that he'd done, like he would have been an all right lad if Lord Henry had never come into his life. Also, I'm not entirely convinced that he didn't have *some* idea that destroying the picture would destroy him-how could it not? If the picture's not going to age, then he must.

Then again, I think the illustration on the cover of my edition of the book could be to blame. It's a pure 80's version in which Dorian's hideous, disfigured, sin-riddled picture looks a bit like... Richard Nixon. No beauty for sure, but definitely no monster either! I'll see if I can find an image and I'll put it up or link to it.